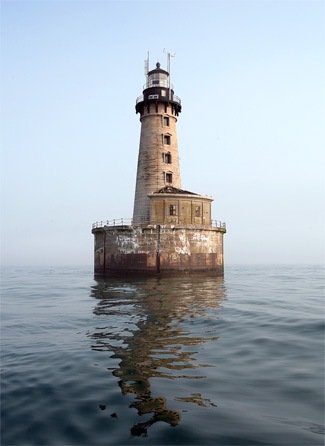 In the middle of Lake Superior, just below the surface, lies its “most serious hazard to navigation,” an underwater “mountain,” called Stannard Rock. Discovered by Captain Charles Stannard of the schooner John Jacob Astor in 1835, the reef  ranges in depth from four feet to sixteen feet and extends a quarter of a mile, posing an unexpected danger to a major shipping lane of the lake.

The location of this reef is unique because it is so far from shore – twenty-five miles from the nearest island and forty-five miles from the nearest harbor.  Due to the complicated location, it wasn’t until 1877 that construction for a lighthouse began, completed five years later. Earning its reputation as the “loneliest lighthouse in the world,” maritime historian Wes Oleszwski reported that duty at the Stannard Rock Light was so rough that there were four resignations and three transfers among its keepers in the first three seasons of its operation.

At the close of each shipping season in early December, the lighthouse keepers were taken off the lighthouse, and the towers were locked until the keepers returned in March. If winter arrived early or stayed late, Lake Superior’s waves splashed over the structure and turned into thick layers of ice, sealing the entry doors, lantern and foghorns.  If the relief boat arrived afterwards, the keepers had to be cut out of the ice with sledgehammers or pickaxes. Sometimes the returning keepers had to cut away the ice to re-open the lighthouse in spring.

Due to the remoteness of the lighthouse, it was designated a stag station, deemed unsafe for families. After the US Coast Guard took over operation of the lighthouse, the keepers were allowed to take one week of vacation per month, rotating their service. In addition to keeping their sanity, the vacations allowed keepers to spend time with their families left onshore.

In his attempt to reach every lighthouse and light station in the Great Lakes, the Reverend William H. Law made a surprise visit to Stannard Rock in September 1907. The crew was thrilled to receive his gifts of books and magazines, not to mention peaches, plums and ice cream!

Contact with the outside world remained limited until the 1920’s, when a radiotelephone was installed, connecting the lighthouse to the Marquette harbor, forty-five miles away. Consequently, the keepers at Marquette kept the Stannard Rock keepers informed about news and weather.

Imagine what it must have felt like to have no contact with the outside world. Did the keepers think they’d been forgotten? They probably did in 1904 when the boat sent to remove them from the light in November arrived in December, two weeks late, after they’d consumed all their food supplies. Or in 1962 after an explosion and fire severed radio contact and the injured keepers waited four days for help. Or after the lighthouse was automated and a maintenance crew was stranded there, caught in a winter storm that trapped them in twelve feet of ice and took them days to chop through.

Ever feel forgotten? Take comfort in knowing that God hasn’t forgotten you.

“Where can I go from your Spirit?
Where can I flee from your presence?
If I go up to the heavens, you are there;
if I make my bed in the depths, you are there.
If I rise on the wings of the dawn,
if I settle on the far side of the sea,
even there your hand will guide me,
your right hand will hold me fast.” Psalm 139:7-10