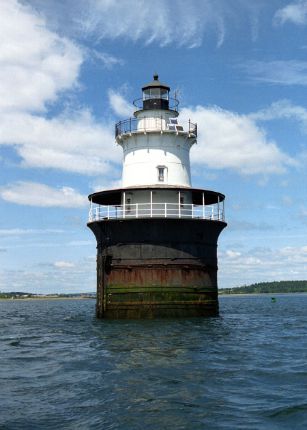 When Connie learned that her boyfriend Elson Small was giving up his career with the Merchant Marines to be a lighthouse keeper, she had mixed emotions. She was happy that he would no longer be out at sea, but her idea of marriage had not involved living in a lighthouse. But Elson asked her to marry him and Connie agreed, wondering what type of adventure their life would be.

But there was a slight problem with the assignment. The Channel Light was a stag station, which meant only men could live there. The two keepers took shifts, spending a few days at home on land, then switching with the other keeper to work at the lighthouse.

Connie felt like a visitor and not a wife. The lighthouse is a caisson-style, an iron and steel cylinder in the middle of the channel. For her to visit her husband, the head keeper would row over and pick her up on shore. At the lighthouse, she had to climb a 30-foot ladder to reach the deck. Connie was terrified of heights, not to mention water, and it took a lot of persuasion and encouragement from her husband who climbed up behind her as support.

Once on the deck, her relief was soon suppressed by worry as she peered over the railing at the water rushing by, wondering how she would ever get back down the steps. Putting those fears aside, however, Connie enjoyed the short time she had with her husband. They spent time walking around the deck which encircled the lighthouse, taking in the panorama of the landscape. 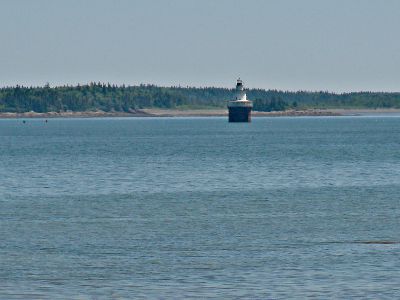 It was on one of those visits that her husband spotted the lighthouse tender coming around the point. She and Elson hurried inside, because the lighthouse superintendent might be onboard to make a surprise inspection. As Elson quickly made sure everything at the lighthouse was in order, Connie frantically searched for a spot to hide in. She decided the coal bin would be the best place, since it wouldn’t be inspected. Down in the bin, she listened as the engines came nearer and nearer, then a frightening thought occurred to her. What if the tender was coming to resupply the coal? What if they dumped loads of the black ore on top of her, burying her alive?

Fortunately, her fears didn’t materialize. The tender passed the lighthouse on its way to inspect the buoys in the channel, and Elson was able to rescue his soot-covered wife from an early demise.

Although Connie’s marriage didn’t start out the way she expected, she learned to cope with her husband’s job, which in turn gave her greater appreciation for the time she had with him.

Many spouses of those in today’s military are faced with the same type of situation. Assignments separate families, creating loneliness on both sides. Those times can be difficult, but they can also offer hope and excitement about the return and reunion.

God knows when we’re lonely, and He promises to be with us. We can rest because we have that assurance.