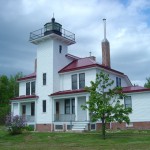 Francis Jacker jumped out of bed, awakened by the sound of a strong gale wind. I must move the station sailboat to a safer place, he thought, as he scrambled outside the lighthouse.

However in the darkness, Jacker missed the place where he meant to land, and was unable to maneuver the boat back to shore against the wind. His only choice was to let the wind and current take him where it willed, which was to a deserted island called Oak Island.

For the next three days, the storm continued as Francis watched his boat’s destruction while marooned on the island. No one even knows I’m here. My wife and my children will not know what happened to me. Hopelessness overcame him as he shivered in the cold, hungry and alone. God, can you see me here?

Unlike many lighthouse keepers whose families lived with them, Jacker lived alone at the Raspberry Island lighthouse in the Apostles Islands of Lake Superior. His family had stayed at their farm when he was appointed lightkeeper, thus making the position a very lonely and demanding one.

After the storm passed, Francis saw an Indian paddling his canoe as it passed near the island. Francis waved and yelled with all his strength until he got the Indian’s attention, who came to his aid and returned him to the lighthouse.

It just so happened that while he was away, his wife and family had come to visit. Not finding him home, his wife had lit the lantern and waited anxiously for his return, praying for his safety.

Needless to say, the family was overjoyed to be reunited with Francis when he came home. In addition to the happy reunion, the lighthouse governing board decided the lighthouse needed an assistant keeper after hearing of Francis’ ordeal. As a result, Francis’ son Edward was appointed as his assistant.

Sometimes we think nobody knows where we are. We feel like Francis did, marooned on an island. Alone. But God knows, and He sees us. We are not alone.

“Where can I go from your Spirit? Where can I flee from your presence?
If I go up to the heavens, you are there; if I make my bed in the depths, you are there.
If I rise on the wings of the dawn, if I settle on the far side of the sea,
Even there your hand will guide me, your right hand will hold me fast.”  Psalm 139:7-10