The Lightkeeper Who Needed a Light

The Lightkeeper Who Needed a Light 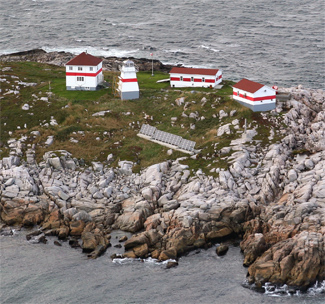 Assistant Keeper Albert Wakely at Puffin Island Lighthouse watched the clock, wondering when the principal keeper would return. As he listened to the wind pick up outside in the night, he knew the lighthouse boat needed to be pulled up the shipway out of the water before it tore loose and was lost.

Finally he decided not to wait any longer for the other keeper to return and help him, so his new wife Averil took a lantern and walked with him down the steep slope where the dory was tied, straining at the ropes as the waves tossed it about. Albert began to pull the boat out, trying to get it up to the shipway while Averil held the lantern. He had to get into the boat to let the mooring rope go, but as he leaped to the boat, the tow line broke and a wave knocked him into the cold October water.

Water crashed over his head as he tried to swim, but the undertow threatened to pull him into the rocks by the shore. An experienced Navy swimmer, he knew the only way to survive was to swim to the nearby cove where the water was calmer. But he was disoriented by the constant waves and uncertain which way to go in the dark.

Meanwhile on the shore, Averil strained her eyes for a sign of her husband. She also knew his best chance was to swim to the cove, but the night was pitch dark. Did he know which direction to swim? Averil decided to walk above the shoreline high enough for Albert to see the lantern and guide him. She saw his head surface, then disappear under the waves several times as she carefully picked her way over boulders toward the cove. When she reached a chasm in the rock and saw him below, she leaped across without thought to her own danger.  She reached the cove as Albert struggled to grasp a boulder to come ashore. After being knocked back by the turbulent waves several times, he was finally able to climb out of the water as Averil ran to help him.

Albert survived his ordeal, thanks to the quick thinking and understanding of his loving wife, who knew he needed a light to reach safety.

In the same way, we have a loving God who shows us the way to safety and life. When we seek his help, he guides us with His light in His Word.

“The Lord is my light and my salvation— whom shall I fear?” Psalm 27:1