The Monk and the Lighthouse

The Monk and the Lighthouse 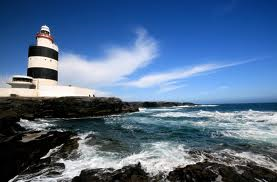 Dubhan was distressed by the sight of another body. The Welsh monk ran to the sailor lying on the beach in the morning sun and knelt beside the man, hoping to find a sign of life. It was not to be, though, for the rocks of the rocky peninsula, or “hook” of land, had claimed another victim.

Determined to save other mariners from a similar fate, Dubhan decided to light a fire in a huge iron basket each night and hang it over the edge of the cliff as a warning. The warning system he created around 500 A.D. was continued by other monks from the monastery he founded nearby until the twelfth century after the Norman army conquered the area, having been told to land either on the hook or on a nearby point called the “crook,” hence the term “by hook or by crook.” The Normans then constructed a tower on the spot in 1172.

The “Tower of Hook” with its open fire at the top was operated by monks until the 1500’s, when Henry VIII dissolved all the monasteries. After about a hundred years of darkness, the lighthouse was renovated in 1667 and has been in service ever since, making it the oldest operating lighthouse in Ireland and one of the oldest in the world.

Dubhan’s actions are similar to God’s guiding of the Israelites through the desert with “the cloud by day and with light from the fire all night.” (Ps. 78:14)

People have always needed guidance, especially in darkness, whether that darkness is physical, emotional, or spiritual. God provides light to guide mankind through the darkness and protect him from injury and death.

“For you have delivered me from death and my feet from stumbling, that I may walk before God in the light of life.” Ps. 56:13

Have you experienced God’s light in the darkness?