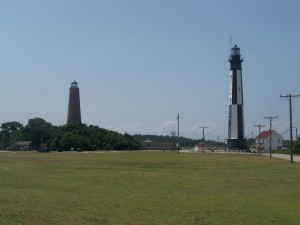 “Hey, old man. You can retire now. I’ve got it from here.” The new Cape Henry Lighthouse had just been lit.

“That so, Sonny? Maybe I’m not ready to retire,” said the Old Cape Henry Lighthouse, its light now dark.

“You might as well. They don’t need you anymore, now that they’ve got me.”

“Just because you’re 89 years younger than me doesn’t mean I’m no longer useful.”

“Useful? How? You’ve got cracks, you’re so old. Why, you don’t even shine anymore.”

“I may be cracked and my light is out, but I’m still standing, watching out over the water as I have since before you were around.”

“But look at you. You’re not even painted. Just old rocks. Not like me, cast iron with my distinguished painted pattern. Nobody looks like me.”

“No son, and nobody looks like me either. I was the first lighthouse commissioned by the federal government and I’m proud of my colorful sandstone, shipped here and individually hand-cut in 1791. You may look fancier, newer, but that’s not my style.”

“But I’m stronger. With the sand shifting and the cracks in your walls, you’ll fall down in no time, while I’ll still be here.”

“I’ve survived a lot in this century. That nasty War between the States gave me a scare, but I outlasted it too. And you’re closer to the water. Guess the sand won’t affect you? Wonder how well you’ll fare in the next hundred years?”

“Sorry, old man. But you won’t be around to find out.”

“That so? We’ll see. Meanwhile, I’m thankful to just keep my perch here on this hill so those ships out there can still see me, at least in the daytime.”

Over a hundred years have passed and much to everyone’s surprise, the old tower still stands on the hill. The sand did shift enough to require a staircase to be built in order to reach the lighthouse door, but today, it is a historical landmark, preserved for years to come. Both octagonal lighthouses now stand on the coast of Virginia, each with its own purpose and place in time.

So is the old always better than the new? As more things are invented, often the old is cast aside. Funny how later on, those “old” things have more value, and the times they represent are the “good old days.”

What about people? As we get older, do we lose our value to society? It can be depressing to realize we have more limitations than we did when we were young, when we felt invincible. Yet, even as we age, we can be thankful for our time – time past and time present, knowing God has been with us all along and will be with us in the future.

“I remember the days of long ago; I meditate on all your works and consider what your hands have done.” Psalm 143:5