The Problem with Lighthouses

The Problem with Lighthouses 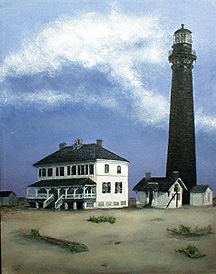 Eddystone, Cape St. George, Sand Key, Chandeleur Island, Key
West, Rebecca Shoal, Block Island, Cape Henlopen, Tucker Beach, Cape May – these, along with many more lighthouses, fell victim to the sea even as they attempted to warn mariners of dangerous areas. Some were rebuilt, others lost forever, martyred to the cause for which they were created.

Other lighthouses are on the verge of destruction – Sand Island, Alabama and Morris Island, South Carolina, are just a couple which stand in water where there used to be land. Perhaps most well-known is the story how the Cape Hatteras Lighthouse was saved by moving it half a mile from the ocean in 1999, a remarkable engineering feat.

The problem lies in their location. Lighthouses are by necessity placed in hazardous areas to protect and guide mariners. However,  these locations are often on sandy beaches, which are unstable foundations. Centuries ago when the lighthouses were first erected, their builders didn’t know about erosion and shoreline shift, how islands change, are created or disappear due to movement of the sand. These builders didn’t have the geological history we have today, and often rebuilt in the same places, but changed the lighthouse form or shape, believing the building itself to be the problem. 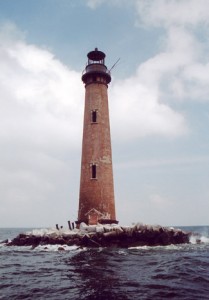 Now we can look at what happened to the lighthouses as a lesson about building on sand. Yet we still do it. Oceanfront property sells for a premium, even though the threat of long-term subsequent erosion exists, and immediate erosion occurs if a strong storm strikes. Today, we can even watch videos of buildings falling into the sea during storms and are surprised by how quickly the foundations are undermined.

On the other hand, some of the oldest lighthouses in the world, like the Roman Pharos lighthouse in Dover, England, still stand. Perched above and set back from the cliffs of Dover, it has endured since the first century when it was built by Caesar Claudius around 47 A.D. It has lasted because it was built out of harm’s way and on a solid foundation.

In our lives, storms will happen, but how well we withstand them depends on how solid our foundation is. Will we be wise, building on firm, Godly truth, or will we be foolish and depend on something unstable, false or superficial?