The Rock That Saved the Lighthouse Keeper

Home » The Rock That Saved the Lighthouse Keeper
Previous Next

The Rock That Saved the Lighthouse Keeper 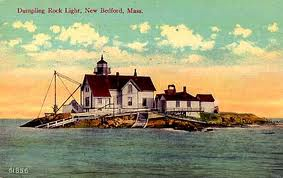 It was September 21, 1938, and keeper of Dumpling Rock Lighthouse Octave Ponsart and his wife Emma were ready to leave on a long-awaited vacation, one they’d saved for through the lean Depression years. The suitcases packed with new clothes for the trip were in the boat that was to take them to the mainland and the car they’d just purchased.

Just as they were about to get into the boat, the wind suddenly picked up and the water became choppy. Keeper Ponsart knew better than to launch the boat in the turbulent weather, so he sent the women back inside while he and the assistant keeper tried to secure the dory. Despite their efforts, the boat got away from them.

The men rushed back to the oil house and the light tower to secure everything they could. As they headed for the keeper’s house, the wave had already washed over the rocks and into the first floor of the house. Keeper Ponsart told the women to go to a second floor bedroom away from the wind. By this time, the family dog was swimming in the living room.

As the fury of the storm intensified, the occupants of the house were certain they would not survive the day. Soon waves were breaking over the house as well as the lighthouse. Gradually, pieces of the house were torn off and windows shattered. The noise was deafening, drowning out the voices of the people inside who were saying their last goodbyes.

Each wave shook the house until it was leaning. A sound “like a freight train or what an earthquake must sound like,” was followed by a lengthy blast of water, then a tremendous jolt hit the house, throwing the occupants to the floor. Keeper Ponsart and Assistant Keeper Fontenot opened the bedroom door enough to see out. What they discovered was sky where the ceiling had been and a massive rock where the living room wall used to be.

The rock, torn from the island’s base, had created a channel through which the water could pass unobstructed. The storm continued to batter the building, but the rock held it down and kept it and those inside from washing away.

When morning finally came and the waters receded, the people on Dumpling Rock had survived one of the most deadly hurricanes to ever hit New England. Seamond Ponsart Roberts, daughter of Octave and Emma Ponsart tells in her book, Everyday Heroes The True Stories of a Lighthouse Family, “Mom said later when she sang the hymn Rock of Ages, it had a new and personal meaning.”

What is your rock? What are you holding onto?

“Truly God is my rock and my salvation; He is my fortress, I will never be shaken.” Psalm 62:2

Story excerpted from Everyday Heroes The True Stories of a Lighthouse Family, by Seamond Ponsart Roberts with Jeremy D’Entremont.