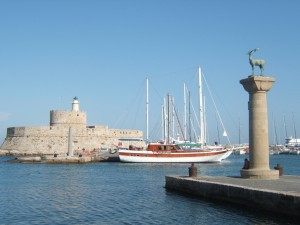 On December 6, many countries around the world celebrate St. Nicholas Day. On this day, children receive gifts in honor of Nikolaos of Myra, the bishop of Myra, Saint Nicholas, whose legend of giving to the needy is well-known. Born in the Greek colony of Patara in Asia Minor, he lived from 270-343.

So where is the St. Nicholas lighthouse?

One is in Istria. Called the “lighthouse of St. Nicholas,” this lighthouse was built in 1882 on the Croatian side of the peninsula of Istria in the Adriatic Sea.  As you might expect, a chapel is located in part of the lighthouse.

The lighthouse of St. Nicholas in Istria

But there’s also the temple lighthouse of St. Nicholas of Myra located in Malorechenskoye on the Black Sea in Crimea. The temple is dedicated to those who died at sea. Instead of the typical dome of temples, this one is capped by a golden cross with a globe under it symbolizing the earth. The globe contains a lantern room which provides light for marine navigation, and its high elevation makes it an ideal location for a lighthouse on the southern Ukranian coast. 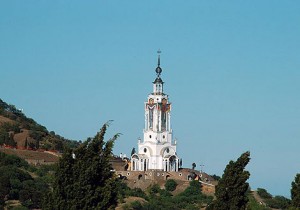 Perhaps the St. Nicholas lighthouse is the round, stone tower on top of the St. Nicholas Fortress in the Mandraki Harbor in Rhodes, Greece. This harbor is noted for being the reputed site of the Colossus of Rhodes. The lighthouse dates back to 1863 during the Ottoman period and was reactivated in 2007.

Then there’s the St. Nicholas Lighthouse Chapel, the first lighthouse chapel in Russia. It floats at the convergence of the Irtysh and Ob Rivers. The lighthouse beacon is at the top of the dome under the cross. Eight large icons under the dome are backlit at night. This floating lighthouse chapel was consecrated by Russian clergy on Sept. 19, 2013. Before the winter months when the river is frozen and without traffic, the chapel is towed to a safer place. 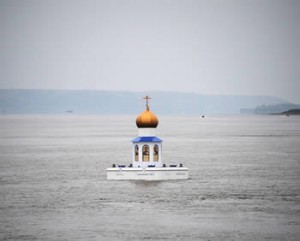 All of these lighthouses and perhaps others are named for Saint Nicholas, the forerunner of the legendary Santa Claus. The fact that so many different people in so many places recognize this saint is notable. But this famous clergyman was only doing what Jesus called all his followers to do – to share, to give, to remember the less fortunate.

Shouldn’t we all, at Christmas, as well as the rest of the year, do the same?