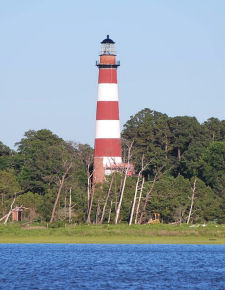 The USS Despatch, a 730-ton steamship powered its way from New York to Washington, D.C. to pick up President Benjamin Harrison and Secretary of the Navy Benjamin Tracy on a route it had traveled many times before.

Built in 1873, the sleek steamship had undergone many changes in its lifetime of escorting convoys and delivering high government officials to ports all over the world. In 1880, the ship was transformed into the first presidential yacht, serving five different presidents, carrying them to inspections and ceremonial duties.

One of the most important ceremonial events occurred on October 28, 1886, when the Despatch transported President Grover Cleveland, his private secretary and members of his cabinet to and from Bedloe’s Island in New York Harbor for the dedication and unveiling of the Statue of Liberty.

But as the Despatch made its way down the coastline of Virginia the night of October 10, 1891, it encountered a storm. When the ship’s lieutenant saw the light from the Assateague Lighthouse in Virginia, he mistook it for a lightship farther south marking the entrance to the Chesapeake Bay and made the mistake of steering the ship off course and toward land. As a result, the ship grounded in shallow water near Assateague Island, where the waves battered the vessel beyond repair.

Thanks to a lifesaving station nearby, the crew was rescued, but the ship was a total loss. All because of an error in judgment, a decision to change course to follow the wrong light.

Many have offered reasons why such a mistake could be made. The storm, lack of visibiltiy, or confusion could have been causes. However, the person in charge of the ship should have known their location by navigational tools, and that they should not alter the course that had been set.

I can relate this story to how we as individuals often make similar mistakes. We know the way we should go, but we get lured off course by things that seem to be good options, then turn out to be poor ones. The key is to know our destination and the right way to get there, and follow God’s leading to make the right choices along the way.

“There are those who rebel against the light, who do not know its ways or stay in its paths.” Job 24:13

Have you ever followed the wrong light?