Things That Go Bump in the Night

Home/Lighthouse Blog Category, Uncategorized/Things That Go Bump in the Night
Previous Next

Things That Go Bump in the Night 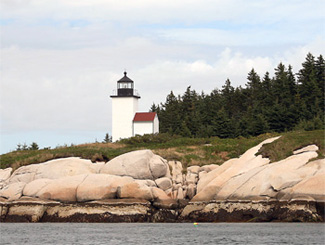 Melissa had finally gotten all the children to bed. She was exhausted from tending the light at the Deer Island Thorofare lighthouse while her husband was gone. She couldn’t go to sleep yet, though. The light must stay lit until the morning sun appeared.

Moving quietly around the house so she wouldn’t wake anyone, she took an oil lamp to her bedroom and placed in on a table next to a chair where she could sit and needlepoint until sunrise.

The gentle sound of waves lapping the rocky shore was a peaceful respite after a busy day with five lively children. Her mind drifted over the day’s activities, then began making a mental to-do list for tomorrow. Suddenly something interrupted her reverie. What was that noise?

Putting down her needlework, she turned her head to the open window and listened. There it was again. The familiar sound of oars hitting the water. But it couldn’t be her husband yet. He wasn’t due back for another week. She reached over and snuffed out the light, then crept toward the window. Outside, she saw two men pulling up to the island. In the moonlight she could tell by their suspicious actions they were sinister strangers.

What could she do to protect her family? The gun her husband had left for her protection was downstairs in the kitchen.  Although she had never wanted to use it, there was no time to get it and fire off a warning shot before the intruders got to the house. She must keep them away without frightening the children. How could she deter them? A smile crossed her face as an outrageous idea occurred to her.

Picking up the chamber pot in the bedroom, she waited until the men were right below the window. When they reached the spot, she poured the unwelcome contents out on their heads. Stunned, the men scurried back to their boat and rowed away as fast as they could, while Melissa enjoyed a good laugh at their expense.

So, this is where I post a Bible verse that relates to the story. What verse can possibly link to this story, you wonder. Since my recent blogs have focused on fear, a verse that shows how we overcome fear comes to mind.

Melissa, though faced with a frightening situation, was driven by love for her family to protect them and with the power of a sound mind, think clearly to defeat her fear (and her enemies). This verse is a good one to remember when faced with your own fears.