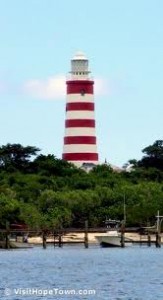 98, 99, 100 – one hundred steps the keeper of the Elbow Reef Lighthouse counted as he trudged to the top each night every two hours to wind the weights that turned the light.

Catching his breath, he looked out at the Bahamian waters. You’d think these people would appreciate this light, he thought. Afterall, before the lighthouse was built, at least one ship per month wrecked on the reef near Hope Town. Because the shipping companies lost so many ships,they had appealed to the British government for help, so the lighthouse was built and first lit in 1864.

The lighthouse saved the ships, but it put a major dent in the local economy. The business of “wracking,” scavenging shipwrecks, thrived inthe area, and no shipwrecks meant no income. The hostilities had manifestedthemselves during the construction of the lighthouse when a supply ship was sunk. Now the lightkeeper had to face the same resentment whenever he went to town, facing angry scowls and bitter remarks.

The local opposition only added to the burden of his job, which the Imperial Light Service expected him to carry out efficiently. He still had to carry the kerosene to the top, trim the wicks, polish the brass, clean the windows, crank the mechanism, and keep the lighthouse spotless. A lot of work with little reward. But he continued to do his best to fulfill his duty, day after day.

Each Imperial Lightstation was furnished with signal flags to communicate with passing ships. The ships would use their own signal flags to identify themselves, share other news or send requests for medical assistance. Sometimes, the ships and the lighthouses would simply make small talk via the flags.

One day as usual, the keeper noted a ship passing by, recording the name of the ship in his log. Then the ship proceeded to send another message. As the keeper recognized the words “Thank You,” a broad smile crossed his face. He then hoisted his own flags to respond, “You’re welcome.” Somebody had finally acknowledged and appreciated his effort.

Often we feel burdened by the responsibilities we face. Too many people with too many demands and little appreciation weigh us down. Yet, we don’t have to carry the burden alone. God knows our challenges, and he has offered to help us carry the load.