Tourists at the Lighthouse

Tourists at the Lighthouse 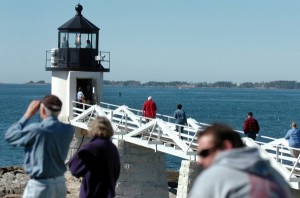 As Connie put the finishing touches on her dinner, a knock sounded at the door of the lighthouse.

Expecting her guests, she rushed to the door still wearing her apron. She opened it to find a group of tourists who wanted to see the lighthouse. Connie graciously let them in, as it was customary for strangers to show up at her door for a look at the lighthouse.

Apparently, these visitors were from the English aristocracy staying at a posh hotel across the river. With her apron on, Connie was taken for the maid as the strangers marched past her to reach the light by way of the family living quarters. Connie bit her tongue, playing a proper hostess while these strangers roamed through her house, stating their opinions of it. After all, it was part of her duty living in a lighthouse. 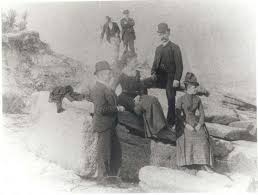 Lighthouses have attracted tourists as long as they’ve been around, so keepers and their families were accustomed to strangers showing up whenever the weather was pleasant, and the water was calm enough for boating excursions. Weekends and summers brought dozens of people to the shores where lighthouses stood. Most of the time, the keepers’ families enjoyed the company after months of isolation when no one ventured out. But sometimes, the visitors didn’t recognize the privacy of the keepers’ homes, since they were government-owned facilities, and felt they had a right to roam wherever they pleased.

In Connie Small’s book, The Lighthouse Keeper’s Wife, she tells another story of tourists who came to visit bringing an unwelcome surprise. Connie had spent the day collecting blueberries and had a bushel of them she planned to can for the winter. She was in the midst of washing the berries when a monkey came around the corner of the house and jumped into her box of berries, eating and spitting them out. A man came around the house, spied his monkey in the berries and began to laugh, calling his friends to look. Connie was indignant and complained, but the man simply picked up his monkey and headed up the tower.

Can you imagine strangers traipsing through your house whenever they desired? The idea of having my privacy invaded, and my home overrun with unexpected guests does not appeal to me at all. I don’t think I’d be as gracious as Connie was.

So what does the Bible say about that? In 1 Peter 4:9, it says, “Offer hospitality to one another without grumbling.”  Even if their monkey eats your blueberries.