The Lighthouse and the Cross

The Lighthouse and the Cross 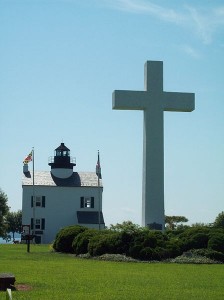 The cross is another symbol representing many things to many people. Where once an instrument of torture, it is now used around the world to  commemorate the supreme sacrifice of Jesus, that sacrifice we recognize especially at Easter.  It too, represents spiritual strength, stability, security and reliability – characteristics Christ demonstrated in his love for us as he accepted the pain of the cross for our salvation.

Each lighthouse has a place in history and the lives it saved. However, that salvation was temporary to a mortal life.

The salvation the cross represents, though, is eternal. For those seeking a true, life-changing experience, they must come to the spiritual cross of Jesus, the only lasting symbol of hope.

May God richly bless you during this season of hope.

“But he was pierced for our transgressions, he was crushed for our iniquities; the punishment that brought us peace was upon him, and by his wounds we are healed.” Isaiah 53:5

This post was previously published three years ago, but its meaning is timeless. Have a blessed Easter.