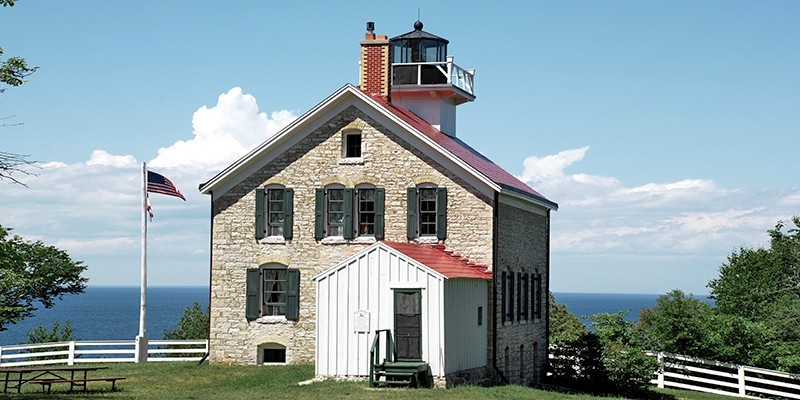 On the northern tip of Rock Island, Wisconsin, at the widest entrance to Green Bay, sits the Pottawatomie Lighthouse. Named for the Native Americans who inhabited the area, the translation is appropriately, “Keepers of the Fire.”

Built in 1837, the lighthouse was the first one built on Lake Michigan in Wisconsin. The first keeper was David Corbin who was a veteran of the War of 1812 and a former fur trapper. Mr. Corbin’s horse and dog kept him company, but he had little contact with other people in the remote location.

His isolation led an inspector in 1845 to report that although Corbin faithfully fulfilled his duties, he was “a bit lonely.” As a result, Corbin was given a twenty-day leave of absence to go find a wife. Unfortunately, when the inspector returned the following year, he learned that the lightkeeper was still alone. Despite being one of the most eligible bachelors in Wisconsin, Corbin had been unsuccessful in his quest for a mate, and seemed to be “doomed to solitude during another dreary winter.”

Five years later, an 1850 census shows Catharine Storce and her three children as residents of the lighthouse. Apparently, Keeper Corbin was finally successful in convincing a woman to come live on the island. But it took time. It took more than twenty days. Perhaps he met Ms. Storce during his leave and began corresponding with her before she consented to join him.

In today’s world of instant gratification and television shows that portray finding a mate among a group of producer-chosen candidates, one can get the idea that love can happen on demand. However, some things take time. Whether it’s finding a mate, reaching a goal or achieving success, the investment of time is required. And once the time is devoted to the task, the results take time as well.

The wisest man that ever lived, King Solomon, learned that lesson and shared it in Ecclesiastes 3:1 “There is a time for everything, and a season for every activity under the heavens:” and in verse 3:8, “a time to love.”

Some things just take time. I need to remember that next time I’m impatient for results. What about you?