Which way to go?

Which way to go? 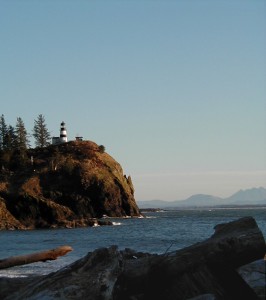 “It must be here somewhere,” thought Captain John Meares, as his ship sailed along the Pacific Northwest coast. However, Meares missed the opening of the Columbia River where it ran into the Pacific Ocean. As a result, he referred to the area as “Cape Disappoint-ment.” The year was 1788, and what Meares didn’t know was that the turbulent seas he experienced were a result of the river combining with the waters of the ocean. He was one of the lucky ones.

Many others tried to navigate the entrance to the river, only to be shipwrecked on the treacherous bar created by the union of the two bodies of water. In fact, since 1725, 234 known ships were lost in the churning waters. It was obvious that something had to be done to prevent future  shipwrecks. A lighthouse was recommended to warn ships of the bar and lead them in the right direction.

Therefore, in 1852, funds were appropriated for a lighthouse, which wasn’t completed until 1856, as even the ship carrying supplies for the construction shipwrecked below the cape. However, since the lighthouse beacon was lit, the number of shipwrecks dramatically diminished.

And thanks to lighthouse keepers such as Captain Joel Munson, who kept the light from 1865 to 1877, there have been more lives saved from ships that did wreck. Captain Munson, distressed by the loss of life, rebuilt a lifeboat he found among debris on shore and used it to rescue survivors of future wrecks. As a result, a lifesaving station was built nearby.

Sometimes life is like a ship trying to find its way into safe waters, yet running into turbulence and wrecking instead. No matter which way one turns, the current seems to push us off course and in the wrong direction. We need help. We need a guide to get us safely through.

Jesus came into the world to show us the right way to go, to lead us in the right direction. By following his guiding light, we can avoid the wrecks. But even if we stray off course and crash, like the lightkeeper, he is still there to save us. This time leading toward Easter is a good occasion to reflect on how his leading has kept us from being lost.

“The people walking in darkness have seen a great light; on those living in the land of deep darkness a light has dawned.” Isaiah 9:2