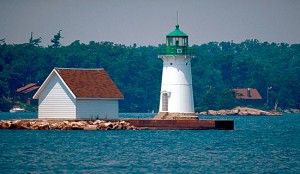 The Olympics represent the highest goal for athletes who have trained  for competition, dreaming of winning a gold, silver or bronze medal. It’s a time to find out who will be recognized for being the best at their sport.

People have competed for recognition since before the Olympics began in ancient Greece.   A desire to be the best spurs them on to higher performance.

In 1912, when Horace Walts became the keeper of the Sunken Rock Lighthouse in the St. Lawrence River, he was determined to win that star. However, his job had additional challenges not common to other light keepers. Because there was no room for a keeper’s house on the rocks where the lighthouse stood, Keeper Walts had to live on the mainland and row to the light each day to maintain it. Each morning, he rowed over to extinguish the light, draw the curtains that protected it from the sun during the daytime, clean and polish the lens and the lighthouse, then relight the light at dusk before he rowed back home.

Sometimes, however, our own personal best is not as good as someone else’s. The Olympics is a good example. Thousands of athletes perform their best, but not all will win a medal. Does that mean they shouldn’t try? What if there were no medals to win?

The truth is we are only accountable for how well we do with what we have. Not everyone is built the same way, and some people have more advantages. Regardless, our personal best is something only we can do. So, if one doesn’t win an award, are they failures? No, a failure is someone who didn’t try. In the end, we won’t be compared to anyone else. We will only be judged by what we did with what we had.

“You, O Lord, are loving. Surely you will reward each person according to what he has done.” Psalm 62:12