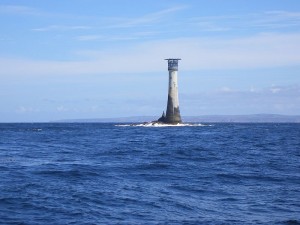 When Keeper Bill O’Brien was assigned to Wolf Rock Lighthouse eight miles off the coast of Lands End, Cornwall, U.K., he found out how the dangerous navigational hazard got its name. As the wind blew through cracks in the rocks, it produced a unique sound like a howling wolf.

For two months at a time, three keepers kept vigil at the isolated tower before being relieved by their replacements. A supply boat came once a month, but sometimes the seas were too rough to send the supplies over, as well as the replacements. Due to the difficulty of getting the boats close to the lighthouse, Wolf Rock was the first lighthouse in the U.K. to have a helipad constructed over the top of the lantern housing.

During fierce storms that often lasted for days, the keepers were shut up in the tower with the outside metal shutters closed to keep water from coming in through the windows. Sometimes waves crashed over the entire 135-foot lighthouse, covering it for a couple of seconds. Keeper O’Brien said when that happened, his ears popped from being in a vacuum.

“You developed an immense faith in the structure because it was built to withstand storms.”

The tower’s four-foot-thick walls were constructed of granite blocks dovetailed together, therefore pressure from the outside served to tighten them even more. So even though a storm raged outside the lighthouse, the keepers felt secure inside.

In the same way, God is our strong tower against the pressures we face. We can have faith in His ability to protect us against  the storms we face, to keep us safe when we seek His protection.

“For you have been my refuge, a strong tower against the foe.” Psalm 6l:3